There are a number of artificial sweeteners available, with names that conjure up Pokemon characters: sucralose, aspertame, stevia, saccharin. And for years, people with diabetes have been using these sugar substitutes to sweeten their coffee while simultaneously wondering if these packets are safe.

There are pros and cons to using sugar substitutes regularly.  Pros of artificial sweeteners include weight control, better control of blood sugars, prevention of tooth decay, and a way to add a more pleasant taste to your food than by adding table sugar. Some of the cons of using artificial sweeteners include nutrition issues (using artificially sweetened beverages as a replacement for nutritious foods), the issue preferring the taste of overly-sweet foods, and also the safety concerns about longterm use.

A write up from the Mayo Clinic offered the following in regards to the concern about artificial sweeteners and cancer risk:

"Critics of artificial sweeteners say that they cause a variety of health problems, including cancer. That's largely because of studies dating to the 1970s that linked the artificial sweetener saccharin to bladder cancer in laboratory rats. Because of those studies, saccharin once carried a label warning that it may be hazardous to your health. 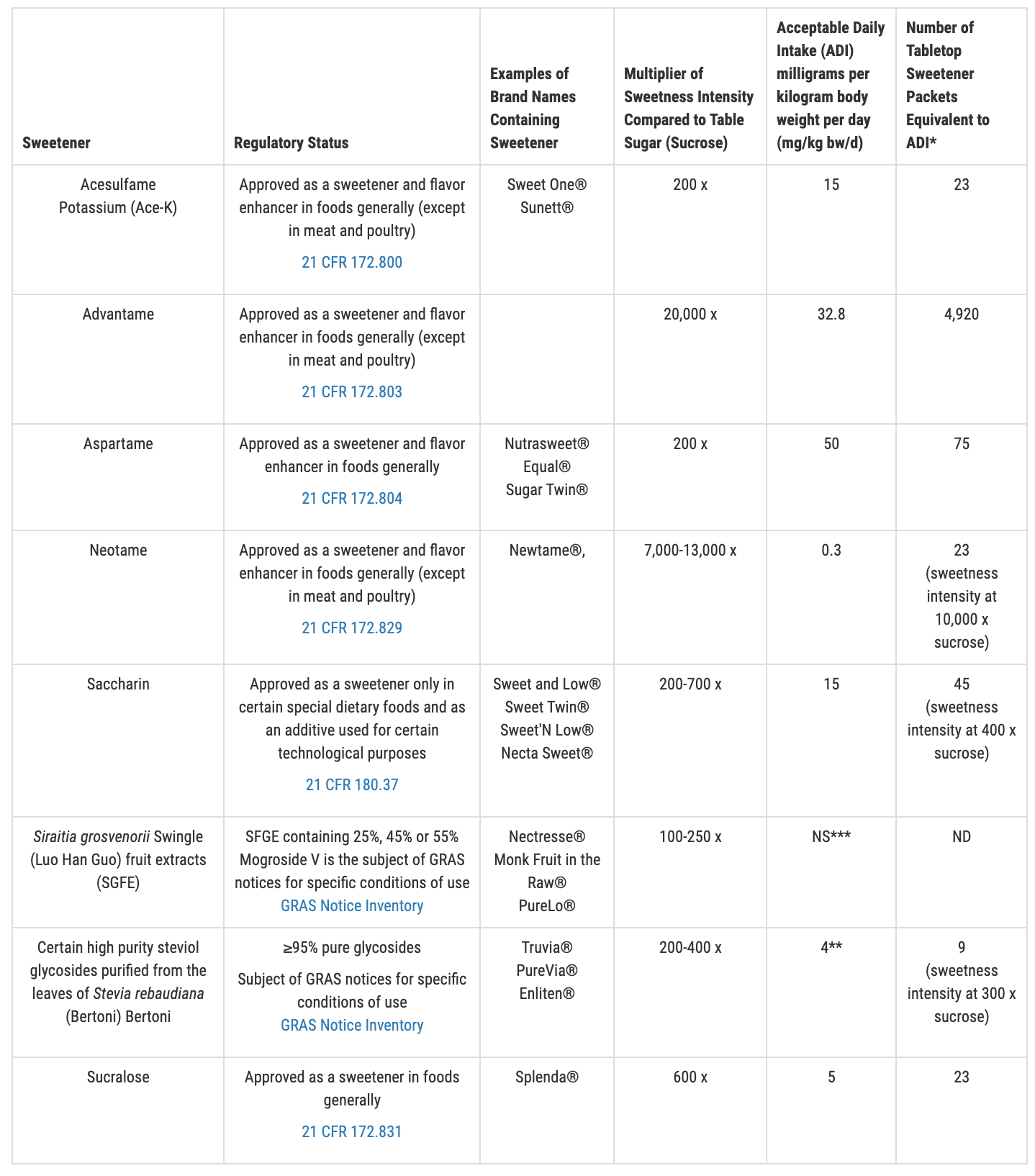 But according to the National Cancer Institute and other health agencies, there's no sound scientific evidence that any of the artificial sweeteners approved for use in the United States cause cancer or other serious health problems. Numerous studies confirm that artificial sweeteners are generally safe in limited quantities, even for pregnant women. As a result, the warning label for saccharin was dropped."

The FDA has set what they call an ADI (acceptable daily intake) level for each sweetener that's approved for use in the United States. (See the chart on the right for that breakdown.) If you have questions about what sweetener might be best for you and your family, ask your doctor or dietician what they would recommend.

Note:  Aspartame, however, does cause significant issues for people who have been diagnosed with phenylketonuria (PKU). According to the Cleveland Clinic, PKU is "a disorder in which the body lacks the enzyme that breaks down an amino acid called phenylalanine. Unless the person avoids certain foods that contain phenylalanine, it can accumulate in the body and cause damage to the brain and central nervous system. Because aspartame changes to phenylalanine and aspartic acid when it enters the digestive tract, people with PKU should avoid foods and beverages that contain aspartame." 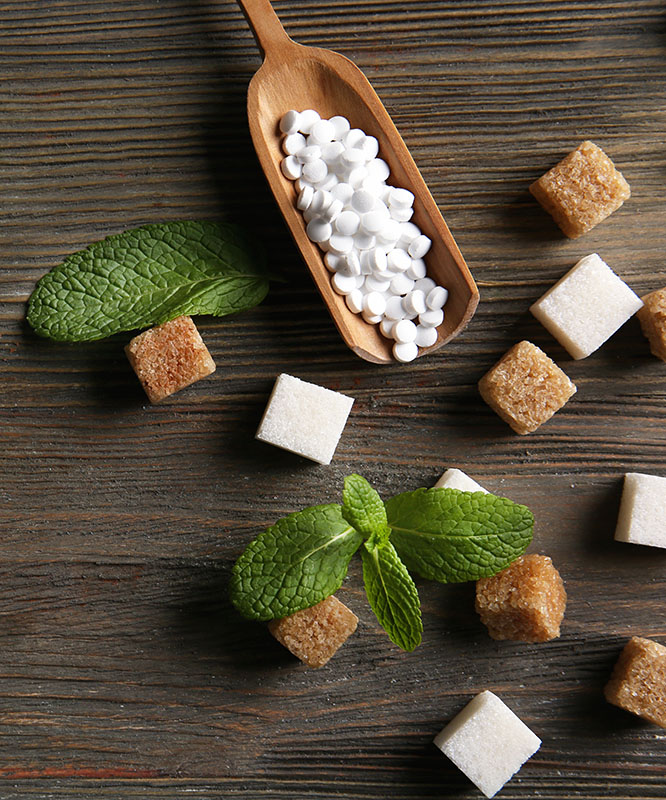 Stevia
To make stevia, chemical compounds called “steviol glycosides” are extracted from the leaves of the Stevia rebaundiana plant. Once processed and purified, this calorie-free sweetener is approximately 300 times sweeter than table sugar. Some people report that stevia has a bitter aftertaste, and can also be expensive.

Sucralose
Sucralose, sold as Splenda, is a popular artificial sweetener that is approximately 600 times sweeter than table sugar. This product does not lose its flavor at high temperatures, making it a preferred choice for baking and cooking.

Aspartame
Aspartame is approved for use in food as a nutritive sweetener, which means they add caloric value to the foods that contain them. It is approximately 200 times sweeter than table sugar. It is not heat stable so is not typically used in baked goods, but it is often found in chewing gum, cold breakfast cereals, and dry items like instant coffee, tea, gelatins, etc.

Neotame
Neotame is approximately 7,000 to 13,000 sweeter than table sugar. It is approved by the FDA for use in food as a non-nutritive sweetener (which means it does not add caloric content to food). Like sucralose, it is heat stable.

Advantame
This sweetener is 20,000 times sweeter than table sugar and is approved for use in food as a non-nutritive sweetener. It is also heat stable (making it a good sugar substitute in baked goods).

Saccharin
Saccharin is approved for food use as a non-nutritive sweetener, is calorie-free, and is 700 times sweeter than table sugar.

According to the FDA, “In the early 1970s, saccharin was linked with the development of bladder cancer in laboratory rats, which led Congress to mandate additional studies of saccharin and the presence of a warning label on saccharin-containing products until such warning could be shown to be unnecessary. Since then, more than 30 human studies demonstrated that the results found in rats were not relevant to humans, and that saccharin is safe for human consumption. In 2000, the National Toxicology Program of the National Institutes of Health concluded that saccharin should be removed from the list of potential carcinogens. Products containing saccharin no longer have to carry the warning label.”

The Role of Low-calorie Sweeteners in Diabetes