You may have never heard of it, but c-peptide is a measure of how the beta cells in the pancreas are making insulin.1 It is a hormone produced by the pancreas, released at the same time as insulin. It has no effect on blood sugar but is a useful marker of insulin production, since the pancreas usually releases c-peptide and insulin in equal amounts. You may have had it measured at diagnosis or in preparation for getting an insulin pump because your insurance required it. Odds are if you have had type 1 for a while your levels will be close to 0. But if you have recently been diagnosed or have type 2, you may have higher levels of c-peptide and insulin production.2 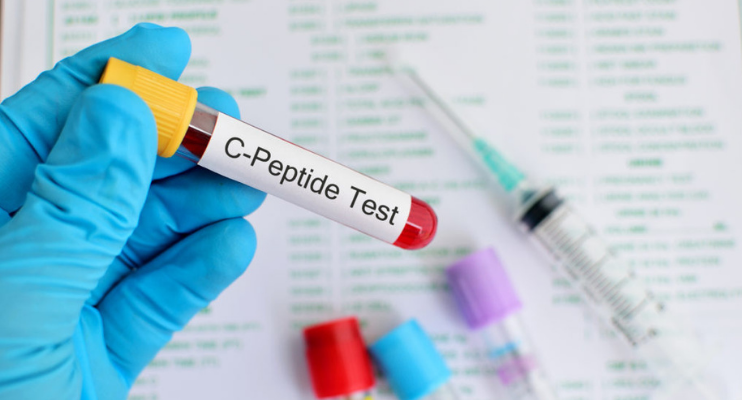 Why does it even matter?
It happens often, but a misdiagnosis can cause challenges in achieving blood glucose and A1C goals.  (See our article here on type of diabetes.) In particular, Maturity-Onset Diabetes of the Young (MODY) is typically misdiagnosed as type 1 and c-peptide can help detect MODY before pursuing further genetic testing.2 It can also show whether or not someone with type 2 diabetes may require insulin.2

Higher levels of c-peptide have been shown to be protective of diabetes complications in various studies including the pivotal the Diabetes Complications and Control Trial (DCCT).2 Additionally, people with lower levels of c-peptide have a greater risk of glucose variability and severe low blood sugars.2 Another study on 6,076 people with diabetes in Scotland showed that even small amounts of residual c-peptide could help reduce complications including DKA, retinopathy, and severe hypoglycemia.3

Preserving beta cells
Unfortunately for people who have already been living with diabetes for many years and whose c-peptide is already minimal, there is not much to do to revive beta cells with the science we have now. However, for people who are newly diagnosed, there are various studies that they can participate in to help preserve whatever beta cell function they have left.

For information on clinical trials near you, check out clinicaltrials.gov. Also,  visit Trialnet.org to find studies for people who are newly diagnosed or for people who want to be screened  for type 1 diabetes. We also hosted a Screenside chat with Dr. Carla Greenbaum who gave updates on Trialnet, so be sure to watch that discussion for details on what’s up and coming from TrialNet.