Thursday’s conference schedule kicked off with the Richard Rubin Memorial Opening Keynote and Breakfast, sponsored by Lilly Diabetes. Crystal Bowersox joined us and shared her very special story and music. She is truly a Friend for Life. Desmond Schatz, the keynote speaker, shared progress towards a cure in the last 25 years. Following Dr. Schatz’s presentation, everyone headed into breakout sessions for the day.

Thursday’s sessions included presentations from faculty new to Friends for Life Orlando. These parent and adult sessions included “Positive Caregiving, or How Not to be the Diabetes Police” with Bill Polonsky. Kajal Gandhi discussed “Diabetes Basics for Families New to Type 1 Diabetes.” Wilderness Guide and PWD Peter Nerothin presented on “T1D and Risk.” There were two sessions on low carbohydrate nutrition, presented by Andrew Koutnik and Constance Brown-Riggs.

The Young Adults Program included sessions for those age 18-26. Thursday sessions included “Finding the Balance” with writers Kerri Sparling and Adam Brown; “Mental Health in Your Twenties” with Psychologist Laura Smith, and “Insurance 101” with Samantha Merwin. There was also a session about “Finding Your Tribe” and “Advocating for Yourself.”

The Youth Program was an exciting place to be on Thursday! After the keynote breakfast, the Youth program started promptly at 9am. The Kiddie Kove attendees (ages 0-5) enjoyed playtime, visiting Sports Central, and the 3-5 year-olds continued their camping theme from Wednesday and had Campfire Time as well as a Binoculars and Bugs session. Both ages also included a movie and rest in the afternoon …everyone needed it!

The Elementary Program (ages 6-8) included icebreakers and games, a scavenger hunt around the convention center, and a session from the always-energetic and popular fitness instructor, Harold Sanco.

The Tween program (ages 9-12) had a full day of icebreakers, a talk about technology, Green Team (T1) and Orange Team (non-T1) and a session on Transitioning to Teens for those ages 11-12. The Tweens also had time at Sports Central.

The Teen program (ages 13-17) on Thursday was required for any teen who wanted to participate in the Epcot field trip on Friday; it was a busy day! They started with a session for all teens, “Tech Talk” presented by Bruce Buckingham. Then they split off for T1 specific sessions including “Navigating Parents and Peers” panel for those T1 teens ages 13-14 and a “Risky Business” panel for the T1 teens ages 15-17. For the non-T1 teens, psychologist Rachel Wasserman led a discussion about “Diabetes Empathy.” After lunch, there were multiple concurrent half sessions. Teens attended four sessions each over the course of the afternoon. There were some amazing sessions, including “Exercise and Insulin” (Ben Tzeel, Bill King and Jimmy Dodson), “#Adulting” (Christina Roth and Zach Hall), “Obstacle Course Jeopardy” (Hannah Cope and Mike Avery), “T1:She” (Rachel Wasserman, PhD and Liz Robinson, MS, PA-C, CDE), and “Diabetes VIPs” (many of the FFL Special Guests).

After a second full day of sessions, it was the night we were all waiting for: The Friends for Life 20th Anniversary Banquet and Ball sponsored by Novo Nordisk. CWD mom, Teresa Littlefield and her team of 25 volunteers turned the Coronado Ballroom into a wonderfully decorated formal dining area for dinner and the party to follow. Disney’s Major Domo and DJ Charles Miles served as Master of Ceremonies for the evening.

As the program began, Dr. Ken Moritsugu, Chairman of the Board and former Surgeon General of the US, welcomed everyone and thanked the sponsors for their very generous contributions to CWD and Friends for Life. The 2019 Board Members joined Dr. Moritsugu on stage and each took a moment to introduce themselves and describe their connection to type 1. Stewart Perry and George Huntley presented information about the new Individual Giving Fundraising Campaign which will help support Friends for Life in years to come. George Huntley kicked off the campaign with a personal pledge to match the first $25,000 of donations to CWD. If you would like to give or see the progress on the Individual Giving Campaign, you can see that here: http://cwd.is/give.

Prior to FFL week, CWD kids and adults had the opportunity to submit a one-minute video for Docu-Diabetes IV (aka the FFL Oscars) coordinated by CWD’s Ben Stroud, Tom Karlya, Kevin Covais, and Amanda Borges, who all work in the film industry. These short videos were viewed and voted on by a Wednesday FFL audience, and then the top five winning videos were shown during the Banquet. They were realistic, poignant, sometimes funny, and always spot-on! Congratulations and well done to all who submitted videos.

CWD Founder and President Jeff Hitchcock then presented the 2019 Distinguished Service Award to Henry and Janet Rodriguez. Henry, a pediatric endocrinologist, and Janet, a pediatric diabetes nurse and CDE, have helped at Friends for Life for years in a variety of roles, including as faculty and grandparents faculty. They have generously donated their time and experience to make a profound difference in the lives of the thousands of children with type 1 diabetes that have attended FFL Orlando.

Next, Jeff presented the CWD Unexpected Hero Award. This award is presented each year to recipients who have made a huge and positive difference to the FFL experience. Usually, the recipients of this award have worked behind the scenes, volunteering many, many hours and their personal expertise for the success of Friends for Life. The 2019 Unexpected Hero Award was presented to the entire Pawlowski family – all eight of them – for their combined seven decades of volunteering every July in Orlando.

In closing, Jeff presented an additional very special award to Chad Patterson, Don Plotts, and Darin Row, who created a special fundraising program called "Climbing for a Cause" that raised $44,000 to fund scholarships for families to attend Friends for Life Orlando 2020.

Next on the stage was Laura Billetdeaux, the founder of the Friends for Life conferences. She told the story of how Friends for Life began twenty years ago, how it almost didn’t happen… but then suddenly was possible, thanks to the support of one particular sponsor who stepped forward with a $10,000 donation. That individual was Steve Bubrick. Laura, Carolyn, and Sam Billetdeaux were thrilled to present the 2019 Friend for Life award to Steve for his generosity and decades of friendship.

The closing slide show this year was dedicated to the two decades of volunteers who have shaped and nurtured Friends for Life. Kevin Covais, American Idol finalist and fellow green bracelet, sang “You Raise Me Up” as photos of volunteers old and new played in the background. It was a wonderful performance, and tremendously emotional.

And with that – the party was on! DJ Miles and Terra invited the sponsors onto the dance floor for a warm-up dance, and then worked their usual magic with the crowd, the music, and the dance floor. As an added bonus, Mickey and Minnie, Belle and the Beast, Cinderella and Prince Charming, and Princess Tiana and Naveen joined the celebration for photos, meet-and-greets, and even dancing! All in all, an energizing, emotional, and spectacular evening to mark our 20th banquet. 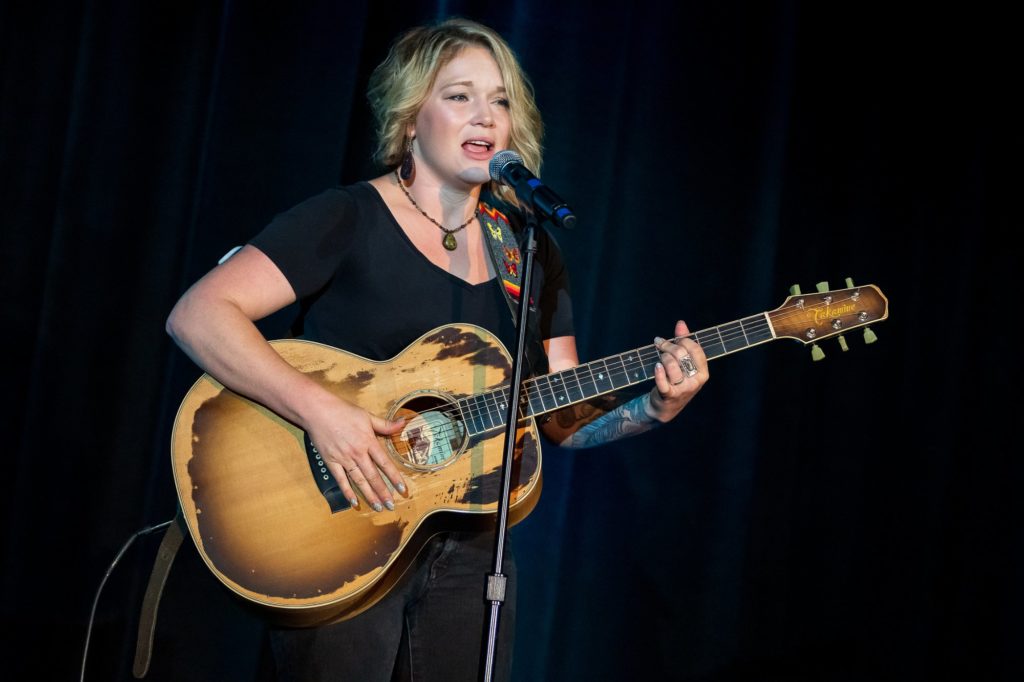 Ice breakers are the first order of business on Thursday morning 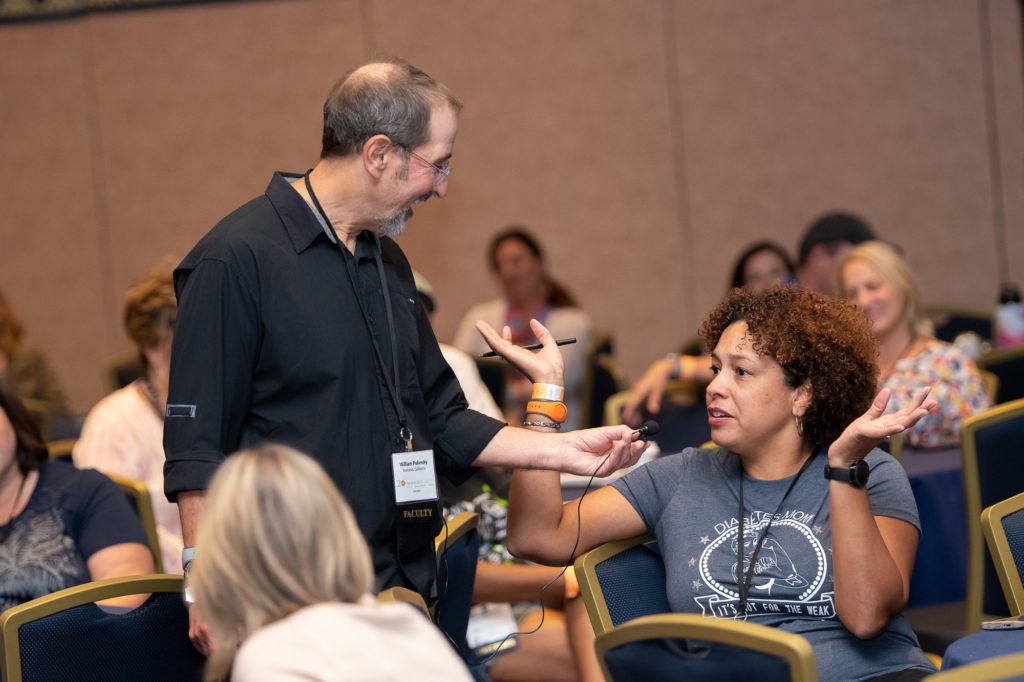 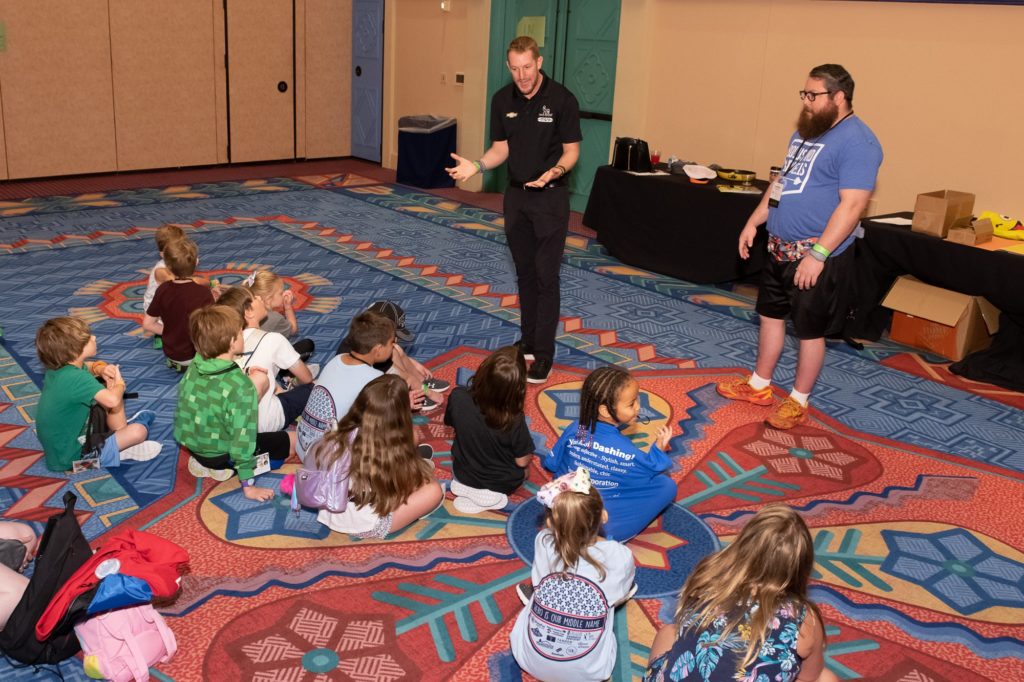 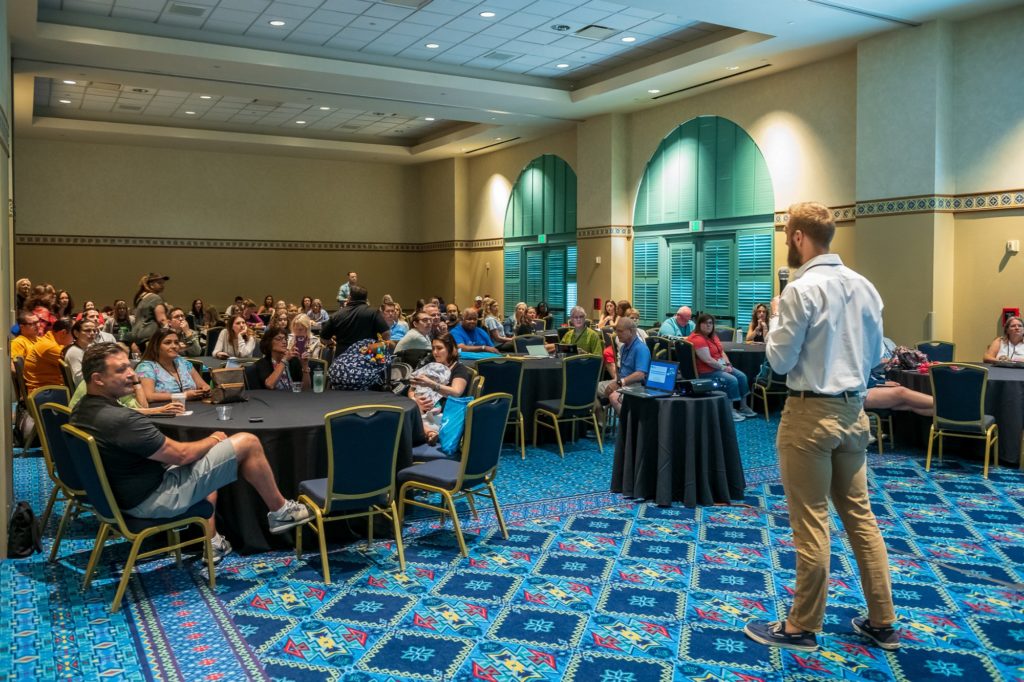 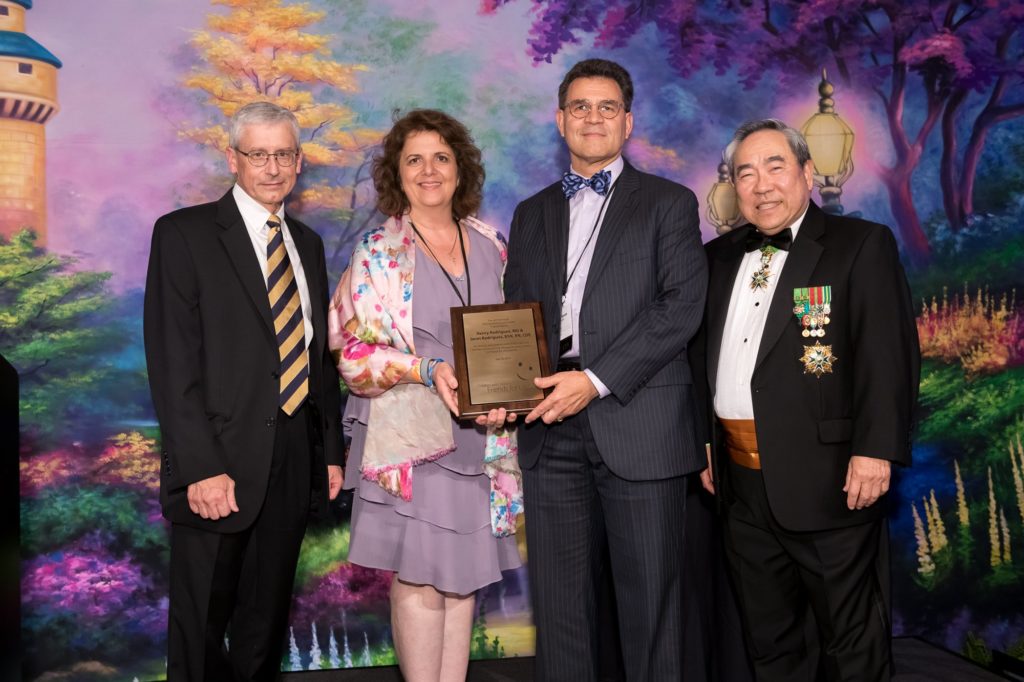 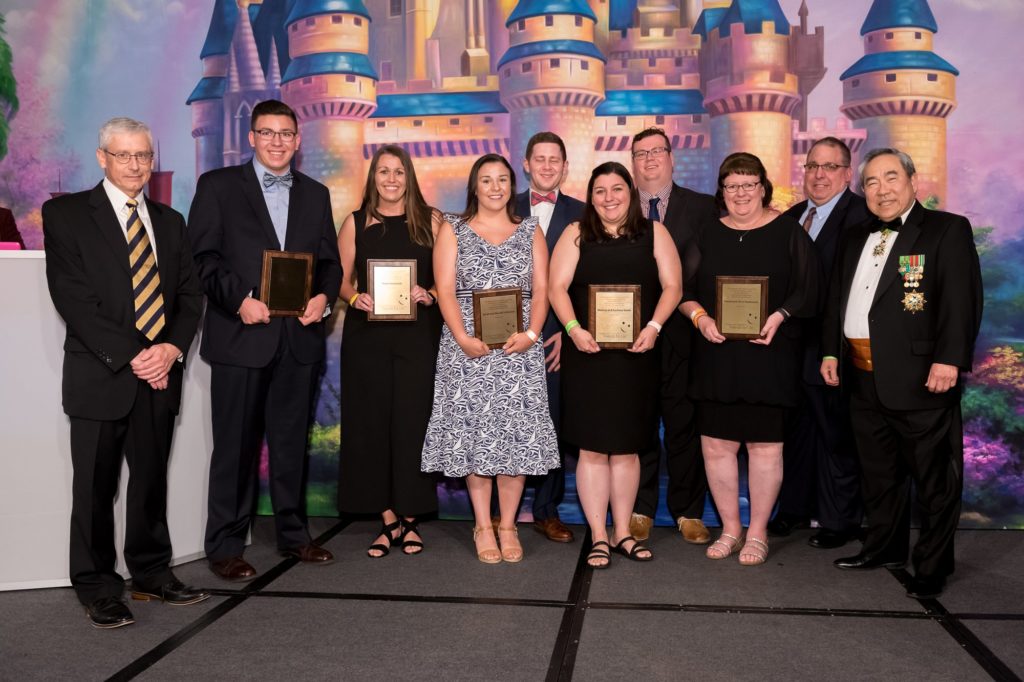 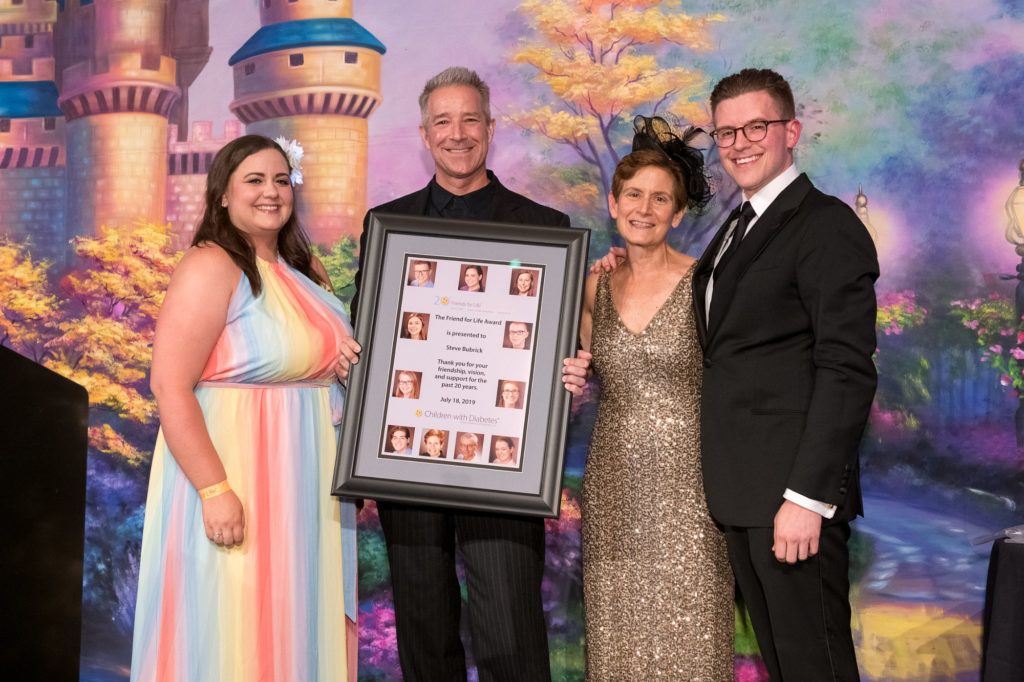 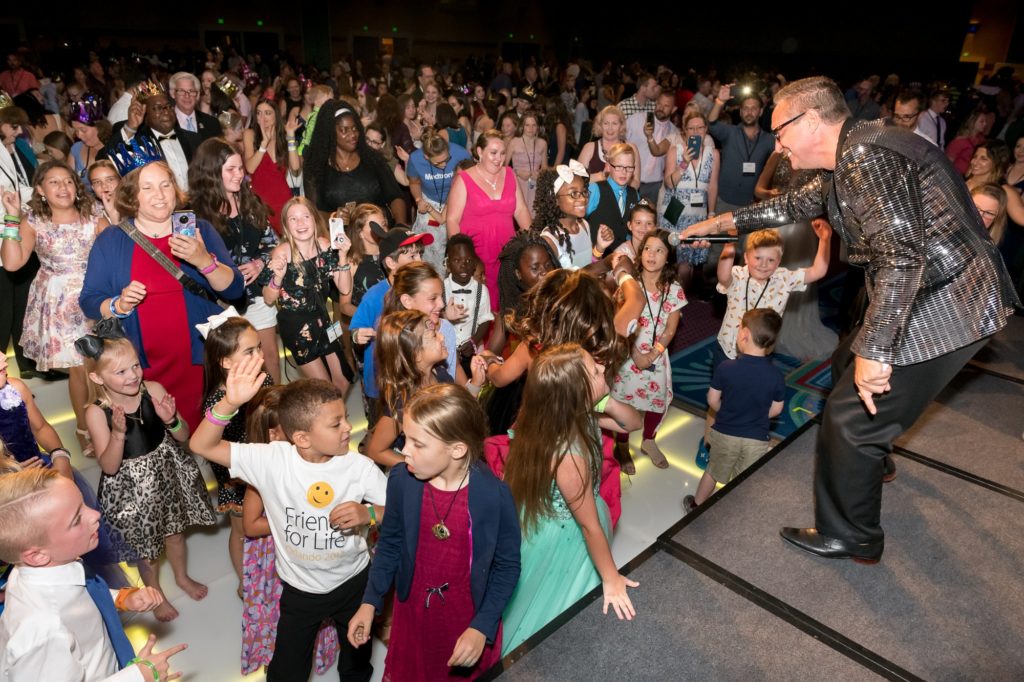 DJ Miles involves the kids during the dance 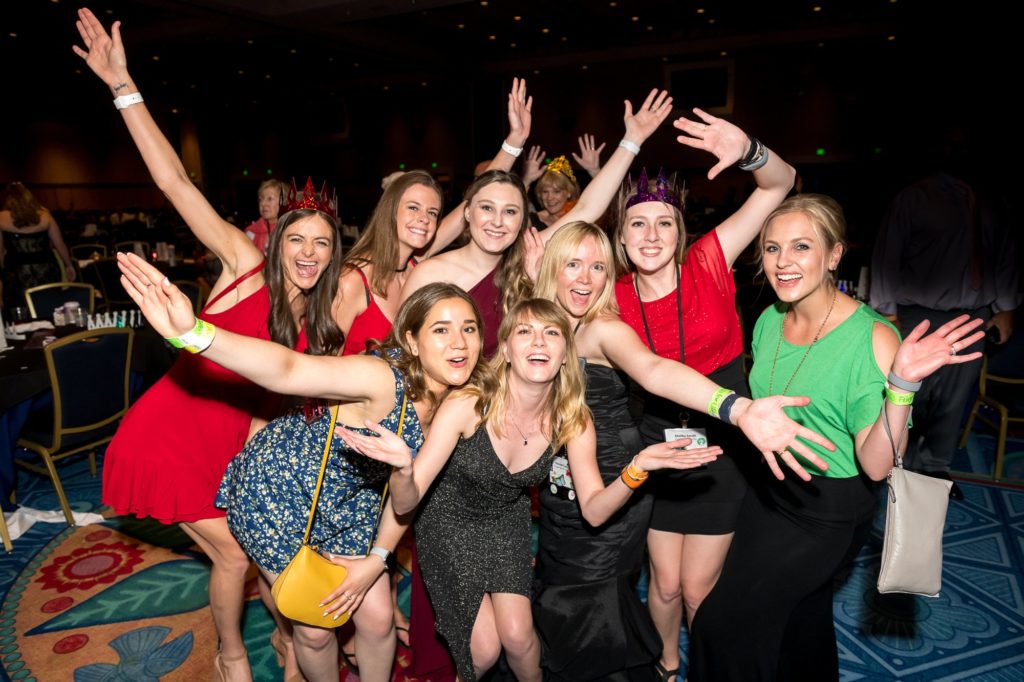