Glucagon Options for People with Diabetes

When you have type 1 diabetes, your body stops making its own insulin. Additionally, the normal communication between the pancreas and the liver is disrupted. In someone without diabetes, the pancreas and the liver balance blood sugars through insulin and glucagon. Glucagon is a hormone that tells the liver to send glucose stores into the bloodstream, and it is made synthetically for people at risk for low blood glucose, such as people with diabetes. People with diabetes on insulin should have glucagon available in case of a hypoglycemic emergency.

The original process of giving or receiving glucagon required mixing a powder with a liquid, which could then be administered using a large syringe and needle. As you can imagine, when you are in an emergency and need to administer glucagon into yourself or a loved one quickly, handling a syringe with a large needle, coupled with the mixing process for the medication itself, is extremely difficult. Hands are usually shaking due to the adrenaline rush, and sometimes, despite accurate mixing and administration, it does not get injected into the muscle as it should in order to be effective.

Enter Baqsimi, GVoke, and Zegalogue: three options that make it much easier to administer glucagon to someone in an emergency, or for someone to self-administer if they are having a severe low. These glucagons were designed to be more user-friendly and getting the glucagon into the person who needs it quickly and effectively. Baqsimi is a dry nasal powder, while GVoke and Zegalogue are injected, similar to the Epi-Pen. In this article, we’ll explain the glucagon options currently available as of March 2022.

Baqsimi is made by Eli Lilly and Company, which is also a manufacturer of various diabetes medications including insulins such as Humalog, Basaglar, and Humulin Regular. Lilly also makes the traditional glucagon kit and has a coupon card where you can pay as little as $30 for the glucagon kit. Unique from other glucagon options, Baqsimi is the only intranasal medication for diabetes, meaning you take it though your nose. It also can be given to someone who is unconscious or unable to self-administer the medication. 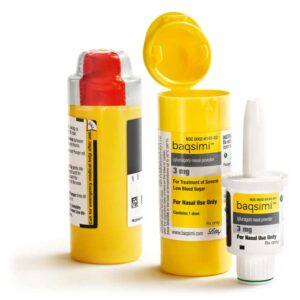 Baqsimi also comes in a two-pack, stored at room temperature, and is easily unwrapped, opened, and ready for delivery. You place the white tube in the nose, like you would with any nasal spray, then push the button on the bottom until the green line on the bottom disappears. It is a little bit startling when the glucagon is propelled into your nostril, speaking from personal experience, but it definitely works!

GVoke is made by Xeris Pharmaceuticals, whose goal is to create innovative solutions for issues that have been ongoing in the medical space, such as an easy-to-use glucagon option for people with diabetes. The GVoke HypoPen is premixed glucagon that is ready to inject, and it comes in two doses: 1 mg for adults and 0.5 mg for children. They also come in a two-pack from the pharmacy, so that once you use one, you still have an additional as backup.

GVoke gets injected into the subcutaneous tissue, the same place that you inject insulin, as opposed to intramuscular like the original glucagon kits. To use, all you need to do is remove the red cap, then place the yellow end on the skin and hold for five seconds. Another benefit of the GVoke HypoPen is that you never see the needle, which makes the process less stressful for anyone with a fear of needles. The kits can be stored at room temperature and last at least through the expiration date.

Zeland Pharma out of Denmark also has an auto-injector option for glucagon called Zegalogue. Similar to the GVoke pen, you remove the cap to the needle along with the red protective cover, hold up against the subcutaneous tissue, and it will automatically inject. This product, however, is only recommended for use in those ages six and above, as opposed to down to age two for GVoke and age four for Baqsimi. 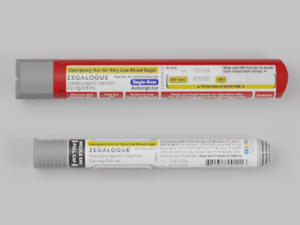 One of the benefits of Zegalogue is that it can be stored in the fridge for up to three years, or out of the fridge for one year. Additionally, Zeland is in the process of studying a mini-dose glucagon option, which will be incredible for people with diabetes looking for options for low treatment that do not involve consumption of fast-acting carbohydrates. They’re also in the development stages of a pump-friendly version of glucagon for the bi-hormonal insulin pump made by Beta Bionics.

Tips For Any Glucagon Use

No matter which new glucagon you try, it’s nice to have options (although they may be dictated by your insurer). And training caregivers to administer glucagon has certainly never been easier.