It was six years, until me.

I didn’t know her before my arrival, but from what I hear, she was a good kid. Running all over the place. Devouring every book she could find. This kid even read in the shower when she was that small. Bloated, damp books strewn about the bathroom. She tortured her sister relentlessly. She tried to play the games her older brother taught her.

She smiled a lot. And laughed out loud.

I’m not sure when I was called out to stay with her, but I’ve been told it was when she was sick on her birthday. She had a fever that lasted for days. Lethargic little thing, under the careful watch of her ever-vigilant mother. I remember visiting her then, settling gently into her tiny body and making it my home. No one knew I was there. They wouldn’t know for months.

I didn’t mean to embarrass her. But she started to wet the bed after I arrived.  She also had a ratty little pillow she needed to cuddle with when she fell asleep. I made her blood sugar so high in the middle of the night that she couldn’t help it: she would wet the bed. And nothing, not the encouragement of her parents, the dreaded pee  alarm, or the shame she felt, could make her stop. So she quit that cuddle pillow cold turkey. “If I can’t stop wetting the bed, then I’m going to stop this!” I felt bad. I had no intention of making her feel so frustrated.

She didn’t cry much. Her mom and dad brought her to the hospital, where she stayed for two weeks. Her parents bought her a stuffed Kitty that she toted around everywhere… the doctors became used to her little face and the presence of the stuffed animal. She said that Kitty was diabetic, too, and both Kerri and Kitty received injections. The fabric of the animal became a little stained from injecting saline, but it made her smile again. She didn’t feel alone.

And she grew up. Even though I was there. She competed in spelling bees. She tap danced for 15 years. She played soccer, albeit badly. (But I had nothing to do with that.) She kissed a boy. She drove her car. She battled with her parents and confided in her friends. She wrote stories. She keeps a journal, still. She went to college. She moved out on her own. She succeeded. She failed. She adopted too many cats. She fell in love. She dreamed. And then she fell in love again.

People thought I would change her life, make her sad. Make her sick. Make her angry.

But instead, I’ve made her strong. I’ve made her fearless. And I’ve made her appreciate everything she has, everything she fights for. She hasn’t let me make her choices. She refuses to let me own her. She controls me. When she is in her last moments, whether sixty years from now or today, she will know, with certainty, that she has lived.

She still smiles a lot. And laughs out loud. 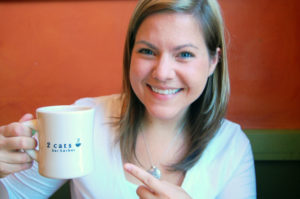 Kerri Sparling was diagnosed with type 1 diabetes in September of 1986.  She is a CWD Board member, part of the FFL faculty, former blogger at SixUntilMe.com, and currently makes her online home at KerriSparling.com.

This website uses cookies to improve your experience while you navigate through the website. Out of these, the cookies that are categorized as necessary are stored on your browser as they are essential for the working of basic functionalities of the website. We also use third-party cookies that help us analyze and understand how you use this website. These cookies will be stored in your browser only with your consent. You also have the option to opt-out of these cookies. But opting out of some of these cookies may affect your browsing experience.
Necessary Always Enabled

Any cookies that may not be particularly necessary for the website to function and is used specifically to collect user personal data via analytics, ads, other embedded contents are termed as non-necessary cookies. It is mandatory to procure user consent prior to running these cookies on your website.