It’s fulfilling to look back on my life and think of how much I’ve done – how much I’ve gotten to experience and really glean out of this short time I have here. In 2016, I made my debut as an obstacle course competitor on the Netflix series Ultimate Beastmaster. After that, I started my on-and-off career as a “course tester” – someone who runs courses before the actual competitions to ensure time limits, camera blocking, and most of all, safety. Over the last 6 years or so, I’ve gotten to participate in a number of television shows such as CBS’s Tough Mudder X, NBC’s The Titan Games, but my greatest and longest testing achievement has been with the hit NBC series American Ninja Warrior. Since Season Eight, up to the present season, I’ve had the privilege to travel from city to city and be on the frontlines of new groundbreaking obstacles.

On obstacle courses, the objective is always just ahead of you; you have to stay focused on the next step and calculate how you’re going to weave yourself through this physical spectacle. Off the course, the objective is to just stay alive. Eat plenty, drink enough water, stay warmed up, and so on. There have been some long, grueling stints on my testing career. From a freak hail storm that filled the water beneath us full of ice, to hard 22-hour grinds on set in the Las Vegas heat. Of all of these challenges and obstacles, for me, there is one tremendous underlying condition: type 1 diabetes.

While my comrades are out there giving their all – just like me – I have to be hyper vigilant of where my blood sugar is headed, how I’m feeling, how much I ate, how much insulin I took – all while trying to perform at my absolute peak ability. There have been few times when diabetes has gotten in the way of obstacle testing. One year, I fell off of an obstacle and smacked the water so hard, my OmniPod peeled right off. Another time, I was told to warm up and get on the course, but I had just checked my Dexcom, and I was 56 mg/dL. In case you’re unfamiliar, that’s very low.

Obstacles are tough, and life can be even tougher. Combining a life with type 1 – which is far from easy – with the adrenaline pumping lifestyle of an obstacle tester is difficult to say the least … but it is possible.

When I was first diagnosed with type 1 diabetes, I was only 18 months old. The year was 1995. By that time, there was no such thing as a CGM; the testing kits at that time took a whole minute to give you a single reading. Pumps at that time were virtually non-existent, or at the very least, they were impractical. As I’ve grown older and began living on my own, I am more and more amazed at my parents resounding courage to send me off to school on my own, to let me go outside unchaperoned, and just live as normal of a life as any other child of my age.

Doctors had explained to them that, because I was diagnosed so young, I may not develop intellectually, physically, or socially at the same rate as my peers. It’s devastating information to stomach for any parent to hear. But despite all odds, they were bold enough to allow not just one, but both of their diabetic children to live normal lives.

This mentality, of the day-in-day-out overcoming of the odds against me, is most likely what brought me into obstacle course testing. I mean, really, what is one more obstacle to face on top of everything else on a Diabetic’s plate? Had I been born any earlier, my life certainly may not have been the same. With the technology and the updates in diabetes care, my opportunities and the opportunities of all diabetics have flourished with each and every advancement.

Whenever I think about my life with type 1 and – despite this condition – how much I’ve done, I am reminded of the poignant words of Lucille Clifton:

Won’t you celebrate with me that every day
Something has tried to kill me
And has failed. 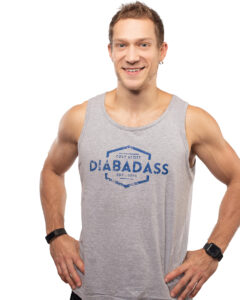 I’m Colt Scott. I’m not totally sure when I was diagnosed. I just know I was about 18 months old. I’ve been involved with American Ninja Warrior and obstacle course racing for about six or seven years now. I’ve competed and tested on a few shows, and today, I coach kids and adults on ninja courses for a living. No matter who comes into the gym, I tell them that they can do whatever they put their mind to.