“Want to come to Disney with us?”

Did you know that Friends for Life started with one, simple email from a CWD mom? Twenty years ago, Laura Billetdeaux sent out an email with a quick query:  “Our family has a vacation planned the first week in June in Disney World. Would anyone like to come with us?”

And when 550 people showed up, they realized they were on to something.

Over the last twenty years, Children with Diabetes has been celebrating and educating through our Friends for Life conferences, and on our 20th anniversary, Laura looks back back at the email that started it all …

I consider myself very fortunate to have had a good idea at the right time, in the right place. A good idea without the right people and resources behind it, however, remains just that:  an idea.

Twenty years ago, in August 1999, I was a mom on the CWD “Friends” email list. Sam had been diagnosed with type 1 diabetes a year earlier, in August 1998, and I’d since found most of my daily support – and all of the information I needed – on the Children with Diabetes website. Our family had a vacation planned for June 2000 at Disney World. I wondered – aloud, on the email list – if anyone from CWD might want to join us. I wrote, “Our family has a vacation planned the first week in June in Disney World. Would anyone like to come with us?”

How cool would that be to hang out in Disney with a few other people from CWD?

It was an idea with apparently spot-on timing. Within several months, dozens of families had responded to my email, and by that first weekend in June of 2000, 550 people from across the United States showed up in Orlando to spend a long weekend together, laughing, crying, playing, learning, and simply being. It felt like a giant family reunion … and it became Friends for Life.

Some of the people from that first Orlando meeting are at the conference today. They’re in leadership roles, they’re behind-the-scenes helpers, they’re sponsors. Amazingly, we’ve been at this so long now that their kids are moving into these support roles, as well. These incredible people have made Friends for Life happen for twenty years by becoming resources themselves. They bring their talents, their time, and their funding to make every year better than the last. Friends for Life never would have happened, or continued, if not for every one of them.

So to all of you, whether you’re an attendee, volunteer, staff, presenter, exhibitor, or sponsor – thank you for stepping up to be the resource. You are the future of Friends for Life, until we all wear orange wristbands.

Finally, a personal and somewhat emotional thank you. The trust that you and your families place in CWD and FFL each year to bring you a meaningful conference makes me stand just a little taller every morning.  You guys rock. 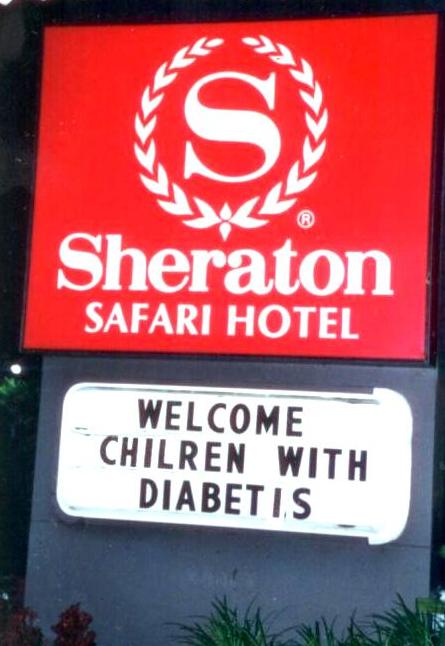 Our first FFL hotel had some typo issues