Successful management of diabetes is as much about information as it is about insulin or oral medications.
Diabetes Basics is designed to supplement the information you receive from your medical team.

None of this content is medical advice. Be sure to always consult your diabetes team before making any changes in your diabetes management.

What is Type 1 Diabetes?

Type 1 diabetes is an autoimmune disease in which the body destroys insulin-producing beta cells in the pancreas. Insulin is required by the body to use glucose, the simple sugar that most foods are broken down into by our digestive system. Without insulin, the body starves to death. It’s important to note that everyone is insulin-dependent. People without diabetes make insulin in their pancreas. People with type 1 diabetes must inject insulin.

According to the National Institutes of Health, an estimated 850,000 to 1.7 million Americans have Type 1 diabetes. Of those, about 125,000 are kids 19 and under. An additional 30,000 Americans develop type 1 diabetes every year, 13,000 of whom are children. Type 2 diabetes is much more prevalent, with an estimated 16 million Americans having type 2. Millions of people with type 2 diabetes have not yet been diagnosed.

What Are the Symptoms of Type 1 Diabetes?

Once over 90% of the beta cells are destroyed or not functioning, the body is no longer able to regulate blood sugar levels and people develop some or all of the classic symptoms of diabetes:
While the symptoms appear abruptly, the development of the disease actually occurs over a much longer period of time.

If you suspect that you or your child has diabetes, contact your doctor immediately. Untreated, type 1 diabetes can lead to a very serious condition called diabetic ketoacidosis, which can be fatal.

Diabetes develops gradually. Studies performed by the Joslin Clinic have shown changes as much as nine years before the actual presentation of diabetes symptoms. The development of type 1 diabetes can be broken down into five stages: 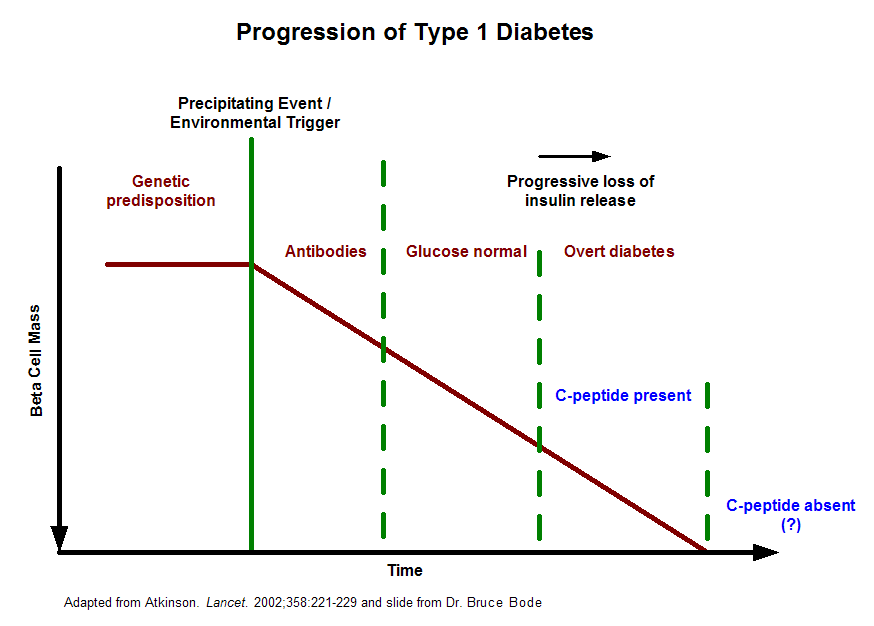 This graph illustrates the progression of islet mass loss that leads to overt type 1 diabetes. According to research by Dr. David Harlan of the NIH/NIDDK, some people with long standing type 1 diabetes have measurable c-peptide production, which may help reduce their risk of complications and could indicate that the body continues to generate new islets even in the face of the autoimmune attack of type 1 diabetes. 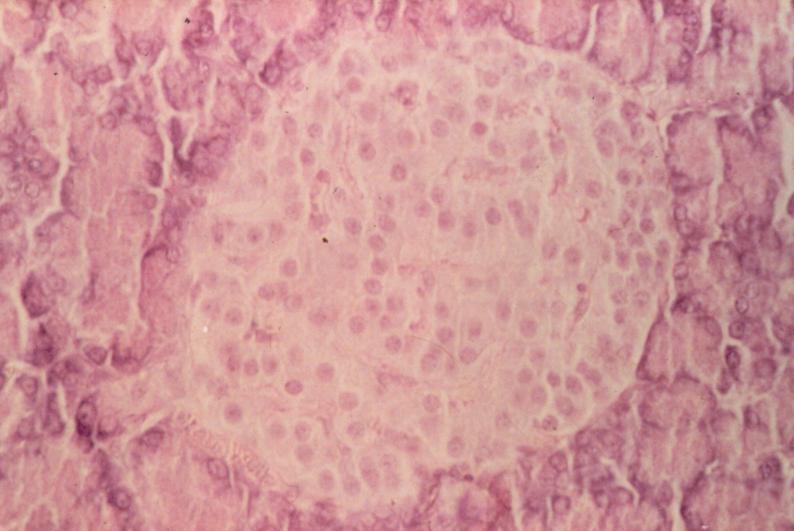 Type 1 Diabetes at the Islet Level

According to research, some people with long-standing type 1 diabetes have measurable c-peptide production, which may help reduce their risk of complications and could indicate that the body continues to generate new islets even in the face of the autoimmune attack of type 1 diabetes. 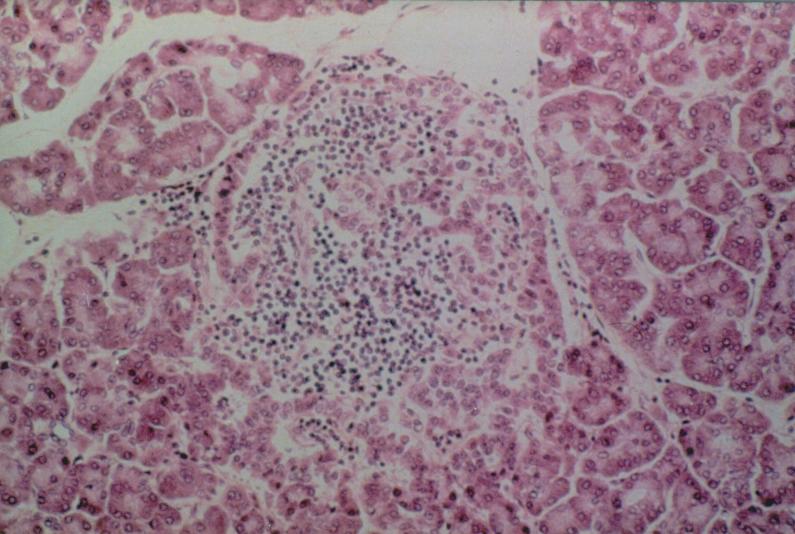 An islet under attack
People with type 1 diabetes usually have a genetic pre-disposition, but one or more environmental triggers is required to develop T1D.

One environmental trigger is thought to be the Coxsackie B virus. Researchers at UCLA found that a small segment of GAD is structurally similar to a segment of a Coxsackie B protein. GAD is found on the surface of insulin-producing beta cells. The implication is that the body’s immune system, after warding off the Coxsackie B virus, continues to attack beta cells because of the similarity of GAD to the virus.

The environmental trigger results in the production of autoantibodies. People with type 1 diabetes have antibodies in their blood that indicate an “allergy to self,” or an autoimmune condition. One autoantibody found in people with type 1 diabetes is the islet cell antibody. This antibody is often present months or years before the diabetes presents. Other antibodies include the GAD (or 64-K) antibody and the ICA 512 antibody. The presence of these antibodies is a sign that the body is attacking its own beta cells.

What Are the Risks of Developing T1 Diabetes?

The overall incidence of autoimmune or type 1A Diabetes in the U.S. and Western Europe is approximately 0.4% in Caucasian families in the first 20 years of life. The figure varies with its geographical distribution, being significantly higher in Finland and lower in Scotland. The incidence is lower in Asian, African American and Hispanic families and also appears to be increasing slowly.

In families where there is already a first degree relative with this form of diabetes, the chances of a future or so far unaffected child developing this condition is about 5%; slightly higher if the father is affected and slightly lower if it is the mother.

In individual cases the risk to a so far unaffected child can be further refined by establishing the HLA distribution on chromosome 6, with special regard to the presence of high risk and protective patterns. To date there are no certain estimates for the impact of environmental factors.

1. Prediction of Type 1A Diabetes: The Natural History of the Prediabetic Period
2.  Type I Diabetes Mellitus of Man: Genetic Susceptibility and Resistance

Insulin is a hormone produced by beta cells in the pancreas. It has three important functions:

In the absence of insulin, blood sugar levels rise because muscle and fat cells aren’t able to utilize glucose for energy. They signal the body that they’re “hungry.” The liver then releases glycogen, a form of stored glucose. This further increases the blood sugar level. When the blood sugar level reaches about 180 mg/dl, glucose begins to spill into the urine. Large amounts of water are needed to dissolve the excess sugar, resulting in excessive thirst and urination.

Without glucose for energy, the body begins to metabolize protein and fat. Fat metabolism results in the production of ketones in the liver. Ketones are excreted in the urine along with sodium bicarbonate, which results in a decrease in the pH of the blood. This condition is called acidosis. To correct the acidosis, the body begins a deep, labored respiration, called Kussmaul’s respiration. Left unchecked, a person in this situation will fall into a coma and die. 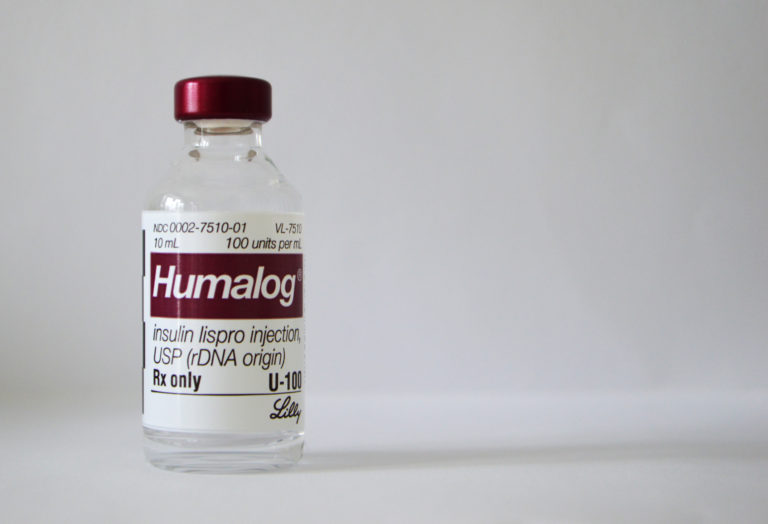 Why Does It Have to Be Injected?

Insulin must be injected because it is a protein. If it were taken orally, the body’s digestive system would break it down, rendering it useless.

One type of insulin (Afrezza) is inhaled instead of injected.

Where Should I Store It?

Unopened insulin vials should be kept cool. Storing them in the refrigerator will help them last as long as possible. Never freeze insulin, however, as freezing can destroy it. Open insulin, whether vials or pens, can be kept at room temperature for about a month.

Where Does Insulin Come From?

Insulin used by people with diabetes can come from three sources: human (created via recombinant DNA methods), pork, or beef. Beef insulin has been discontinued in the US, and essentially all people who are newly diagnosed are placed on human insulin.

Find out more about insulin, including what kinds are available and information on administering it: