On January 19, 2016, Trace was diagnosed with type 1 diabetes at the age of 18 months old. After weeks of exhibiting extreme thirst (which we attributed to teething), soaking through his diapers and vomiting, Trace became very lethargic and could barely move or hold his head up. After taking him to the pediatrician’s office, where his urine was checked, I was told to take him to the ER immediately. Trace had a blood sugar of 1,000 and was in DKA (diabetic ketoacidosis), and it could be life threatening.

This past January we celebrated Trace’s five year diaversary. In the five and a half years we’ve been a T1D family, we’ve experienced many highs and lows (pun intended!). We’ve had to deal with grieving the loss of the life we thought we’d have, anxiety and fear rearing their ugly heads. I will not say the last five and a half years have been easy, but I will say we’ve made it through and we know we’ll make it through the next five and the next five after that or until a cure is discovered. Trace is a brave, healthy and thriving seven-year old boy who loves football, LEGOs and drawing. He and we are determined to not let type 1 keep him from doing any and everything he loves! 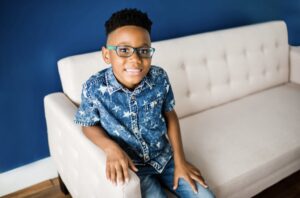 Taria, mother of Trace, is the Co-Author of 2am Parenting: The Highs and Lows of an Unexpected Diagnosis and Vice President of The traceBRAVE Foundation, a nonprofit organization that aims to help families with children who have type 1 diabetes.